Why the Quooker has the solution 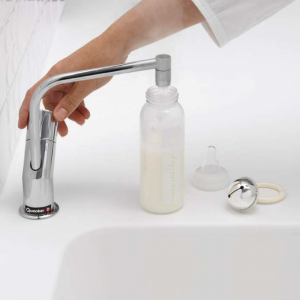 If an instant boiling water tap doesn’t dispense 100°C boiling water then it’s not really doing its job and it’s not going to replace your kettle effectively. In fact, the Quooker is the only product on the market that does deliver 100°C instant, filtered boiling water, though there are lots of other products that provide ‘near boiling’ or 98°C or even 88°C water.

But what’s the significance of 100°C? For housebuilders and their customers, it is of huge importance. 100°C boiling water means that it is sterile and bacteria-free, so much so that baby bottles and even medical equipment can be sterilised with it, which is not part of the promise of any other boiling tap.

Unless it’s 100°C it’s just not hot enough! It’s not even hot enough to make the perfect cup of tea whereas – with the Quooker – you get a delicious brew of tea each and every time and it’s always fresh.

Quooker can provide 100°C water because it is covered by a large number of patents that prevent others using a similar system. The Quooker’s undersink stainless steel tank has a revolutionary vacuum insulation and thermos technology that holds the water under pressure at a temperature of 110°C and ensures every delivery removes the risk of harmful bacteria such as legionella. In addition, the built-in HiTAC water filtration purifies the boiled water before delivery.

Housebuilders have been very disappointed when they have installed a tap that doesn’t deliver at 100°C when they discover, too late, that they haven’t eliminated the homeowner’s need for a kettle. With no lead, no plug, no kettle, a clutter-free Quooker has become every homeowner’s must-have kitchen appliance.